So it’s been a really long time since I wrote my last blog.  I could probably write 10 separate blogs (and I still may) to cover each of these topics in their entirety, but for now I want to give everyone and update the crazy myriad of things that have occurred since my last writing.

Since the end of August, I’ve hit some major milestones.  My legal name change was completed at the end of October.  I elected to petition the court for a confidential change meaning that I would not have to publish an ad in the newspaper announcing my name change prior to the court date. It also meant that the court records and my updated birth certificate would be sealed once the case was closed. However, there is an added burden as well.  In Wisconsin, a confidential change requires you to prove that publishing the ad would likely endanger you. So I went into court that day armed to the gills with evidence of harassment I’ve received, general stories & statistics of transgender violence and even supporting letters from my therapist and doctor.

As is often the case for me, it was a case of over-thinking on my part. I ended up not needing any of the materials.  The two sentence explanation I had included with my petition was enough for the judge.  So much so, that before he even called me to testify to the court (confirming my identity, where I live, etc.) the judge had already told me he was going to approve my petition.  In literally 4 minutes, I became legally recognized as Alyssa Miller.

Thanks to a letter from my OB/GYN (managing my hormone treatments), I was able to update my gender marker on all government documents except my birth certificate. Wisconsin’s antiquated laws and ridiculously conservative government still require documented surgery to change gender on the birth certificate.  But wow, what a feeling having my driver’s licenses and (finally) my credit cards showing the proper name.  I will say the name change process itself with all the various government entities, businesses, vendors, etc. has been a complex adventure.  But that’s a topic for a whole separate blog.

I had planned my name change to coincide nicely with my formal transition in the workplace, which in turn would coincide with my start of living full time as my authentic self. Well that plan worked out terrifically. As planned, on November 1, I made the announcement to my full company of roughly 50 people, that I was now officially Alyssa and would no longer be known by my old name.  I got a new email address, a new network user account, everything (although it did take some battling on my part, again a topic for another time perhaps).

A few days before the announcement I spent my last moments physically presenting as a male. As some of you know, I am a soccer referee in my spare time. That Sunday, I worked my last game of the season. Part of the reason for my November 1 date was that I knew soccer would be done by then and I could more easily make the switch.  So that day, I refereed one last game as him.  I took the picture on the left below in my car immediately after the game.  This was truly the last time the public would ever see “him”.  The picture on the right was 2 hours later after driving home, taking a shower and getting myself put together for dinner out with my parents. 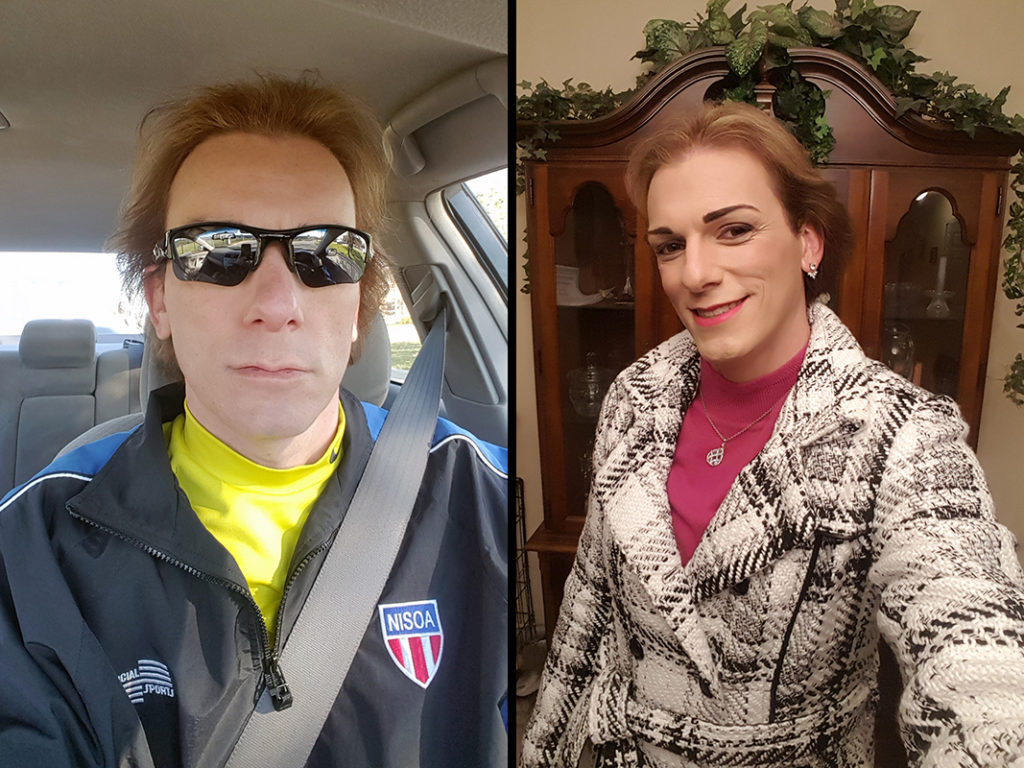 Since going full-time, I’ve already had my first experience at client site. I’m not 100% clear on if the client knew about my transition (we had one or two phone conversations with me as “him” the month prior). However, it didn’t matter because the client was great.  I met with many people who knew nothing of me prior to meeting in person and they were all terrific. Other people in the client’s office who were in no way associated with the project I was working on were all very friendly and natural in their interactions with me.  There were a few stares, but those possibly could be the result of seeing a face around the office.  Who knows?  I even had one gentleman flirting with me on my second day in the office.  It was oddly affirming.

As far as my medical transition, I know for many that’s important info you want to hear about too, so I can provide some updates there as well.  I’m two days short of the 8 month mark for hormones and I’m starting to see some really significant changes.  My breast development really kicked in at about the 6 month mark.  At this point I’m somewhere between an A and B cup, much closer to a B and in fact that’s what I’m wearing today.  My hair has also thickened, enough so that a couple months ago I got it colored and styled and decided I would ditch the wig permanently (as you may have noticed in the photo above).  I haven’t gone back.  It is so freeing at this point to finally be able to go out without prosthetics (no breast forms or enhancers, no wigs, just me from head to toe).

I’ve had 5 sessions of laser hair removal on my face now and there is still a significant amount of hair growth/re-growth. Despite being the ideal candidate with light skin and black hair, the results are a little disappointing.  I have one session remaining in the package I bought and then it’s back to electrolysis. Overall I’m noticing my facial features are softening and my skin is definitely becoming smoother. I’m a little disappointed in the lack of body fat redistribution (my hips really aren’t growing the way I’d have hoped), but I’m hopeful that as I progress  toward the one year mark, that will improve.

Finally, also on the medical side of things, I had an initial consultation with Dr. Schecter in Chicago.  We discussed both Breast Augmentation and GCS, both of which thankfully are covered by my insurance. He was someone impressed by the level of breast growth I’ve seen thus far so I’m still hoping that I might not end up getting Breast Augmentation.  He gave me a good checkpoint to use for when I should try to make a decision about whether or not am happy with my own growth.  On the GCS side, it was a little daunting and suddenly all too real when he started showing me post-op pictures.  His work is very impressive and I was happy that he had a nice mix of results to show. In the end, leaving his office I felt more sure than ever that GCS is going to be the right path for me.  The thoughts of recovery I admit make me nervous, but the end result is really going to be worth it.

So that’s all for now, sorry it’s more of just a tactical update than a deep analysis of trans issues so hopefully you still find this information useful.  As I said, I could write complete separate entries on many of these topics.  So let me know in the comments what you want more information about and I’ll use that to guide future topics. I’ll also try to be more active.  A three month hiatus was much needed with all that was going on, but I also feel like I’m letting my readers down.  Until next time, take care of yourselves and each other.