Well it’s official, this past week was my 40th birthday and my first as a trans woman.  It was a really big day, not because of the number but the significance of it all.  Since I’m early in my transition and not full time yet, the fact that I’m transgender adds a new dynamic to so many life events and this birthday was just another example.  My parents, who have been amazingly supportive of my transition, realized the significance and gave me a really special gift.  It was one of my mother’s handmade cards and on the inside it read: 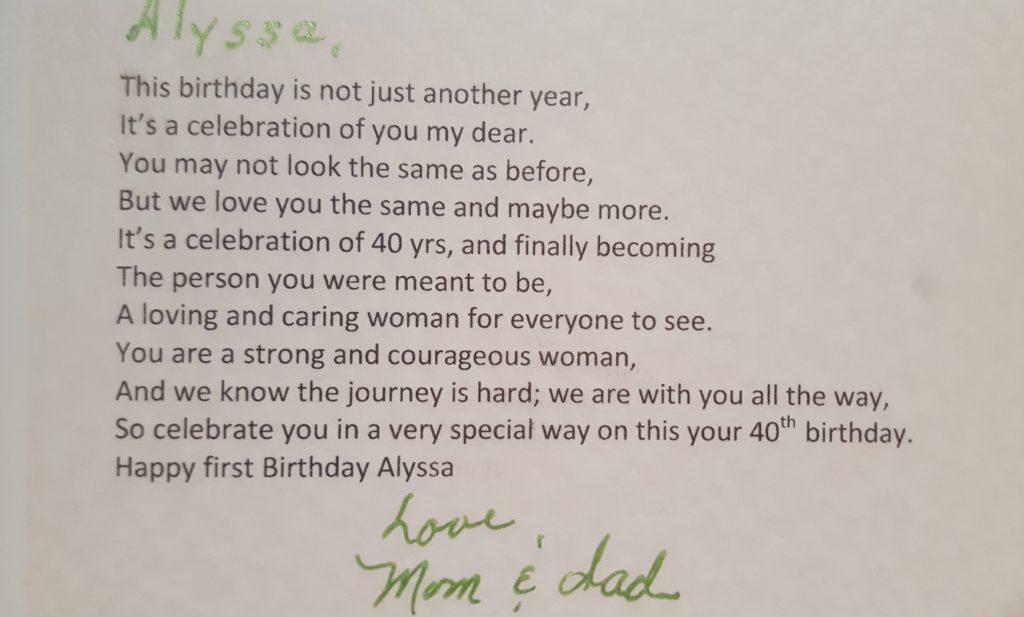 So yes, I cried.  What an amazingly sweet thing to say.  What a beautiful way to express it, and what a truly wonderful way to affirm their acceptance and support for who I am.  However, later, as I shared the experience with friends and family, I began to remember how rare an experience like mine is for transgender people.

Truly, my heart aches every time I’m on Facebook or a transgender message board and I read the stories of my trans sisters and brothers whose parents abandoned them.  Many are near my age or older at the point their parents disown them.  How sad that parents, in the twilight of their lives, would throw away the greatest part of their legacy, their own child. Its truly gut wrenching to know that these people, who spent their whole living in the pain of shame and gender dysphoria now are forced to trade that pain for the pain of being rejected by their own parents.

Sadder still to me are the younger trans folks, especially the kids, whose parents cast them aside. It’s well documented just how significant of an issue homelessness is among the trans youth. Children just seeking a life where they don’t have to be ashamed of who they are, instead now are forced into a life they could have never imagined because those that took on the responsibility of child-rearing have ditched that responsibility once the going got tough.  Certainly, this also contributes to the unusually high degree of suicide among trans individuals. It’s shameful and something that needs to change.

When I began to deal with the possibility of transition, I knew the potential consequences.  It’s stated in so many transgender resources that if you’re going to transition, you have to be prepared to lose everything.  You have to be ready to give up your marriage, your home, your parents, your siblings, your job, everything. So I did take that risk into consideration as I explored and ultimately concluded that I was transsexual and transition was the only way I could survive.  But for me it was a choice of life over death, there was no way I would have made it another five years living as I was.

I’m one of the truly fortunate ones.  I have not lost my siblings or parents, in fact they’ve become my greatest advocates.  My children all accept me and have no problems with the fact that their father is a woman. I haven’t lost my marriage completely, while our relationship will never be the same my wife is still here. She’s had major struggles of her own coming to terms with my transition, yet despite her pain she’s done her best to be supportive and to defend me in the face of idiocy from others.   Even my job appears to be stable at this point.  Although the real test will be once I go full-time and they have to use the correct name and pronouns and interact with the real me.  Ultimately, I’ve been amazingly lucky up until now.

I was told recently by another trans woman that I have been an inspiration for her.  I’ve been told my others about how courageous I am, yet I just don’t feel it.  So far, my road has been a lot less rocky than others have had to face. I almost feel like I’ve had it easy.  While I’m glad to be able to inspire others, I truly hope that I’m not giving others a false sense of hope.  We each must prepare for the worst as we embark on this journey of transition.  We can hope for the best as well but chances are the reality will be somewhere in the middle.

One Reply to “Parental Support – A luxury few transsexuals experience”