As a transgender woman progressing through my transition, I often hear comments about how strong or courageous I am. I’ve never been very good at taking compliments but these statements in particular I’ve found difficult to believe. I feel like I’ve been a scared little girl, hiding in shadows all my life. Even as I creep out now, I fear that one wrong step, one ill-timed event, might send me running back to the relative safety of that hiding place once again. A few recent events allowed me to really analyze the realities of the strength, confidence and courage it takes to be successful on this journey we call transition.

This week was a tough one for transgender folks in the United States.  Our government, at its very highest level, has made clear its intentions to launch an all-out assault on our rights as citizens of this country.  Inspired and emboldened by the announced ban on transgender people in the US Military, I took to Facebook and issued a call all my transgender siblings to push ourselves into new and possibly terrifying levels of visibility within our communities. As I reflected on the still very present threats to our very existence as transgender people, it seemed clear to me that our lack of strength in fighting back against these attacks has made us easy targets for these bullies.  I firmly believe that presenting ourselves in the world with confidence will, over time, erode the will of our enemies in their continued attempts to marginalize and invalidate us.  I, for my part, chose to go to my laser hair removal appointment (where I had not yet announced that I am transgender) in almost no makeup, with no breast forms (just my tiny buds under a bralette), my natural short hair, and a big bold pink shirt that announces “This is what Trans Looks Like” on the front. 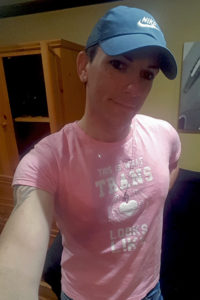 My intent to was to make it clear who I am to everyone I encountered that day.  I truly believe the shirt sends a message of confidence and I felt being seen that way was a small token of defiance against the increasing discrimination in society.

The next day, my best friend and I had a girls’ night out at a local club. They were hosting a preliminary round of a drag competition, so there were many drag queens, cross dressers and transgender people in attendance.  At one point in the night my friend and I were approached by a cross dresser.  I’ll use that term and he/him pronouns as that is how he identified himself to us.   He introduced himself and began some small talk with us.  At some point he told my friend “I couldn’t tell that you were a guy from over there”, I believe meant as a compliment but somewhat backhanded.  He then turned to me and said, “You though, I could tell you were a guy” and proceeded to tell me about how my jaw line was too strong and tried to give me advice on contouring to minimize that.

As you might imagine, this was a pretty crushing blow for me.  I was already struggling with my self-image because of the after-effects of my Laser treatment the day before.  The inflamed follicles and redness made my face (which I had been noticing taking on a decidedly feminine quality) now look very masculine again. So tossing this commentary on top sent me into an emotional spiral. I hung my head, said very little, and just prayed for the conversation to end. Thankfully, my friend understood right away, of course, the impact that statement had on my emotional state. After chasing him away, she was able to look me in the eyes and help pull me up from that dark place.

It took some time but I began to think about it and realized that I was not projecting the same confidence I had the day before. I looked at my friend and felt guilty for allowing this person control over my emotional state and to potentially ruin both our night. I was angry with myself for not having the courage to stand up to those comments and inform this person that his statement was out of line and that I would not accept that treatment from him.  Through that anger and that guilt, I was able to summon the strength I needed to turn myself around. I lifted my head back up and refused to let our night be turned sour by this crass stranger.

As my friend and I talked further, we discussed how this was just a small example of the things we have to face as transgender women in this world. That in fact, in the future we’ll have to face more difficult adversity.  My friend pointed out that this could be a learning experience, implying that it could be a positive experience.  She was right.  I chose to turn this event on it’s head.  Through hindsight, I learned how I could have responded to the situation rather than retract from it. Ultimately, it happened in a pretty safe place, so it was good time to get that lesson. Realizing that I had briefly given control over my emotional state to someone else, galvanized me to not let it happen again. I believe I am now better prepared to handle a similar situation in the future.

Speaking about this situation this morning with another very dear friend. She pointed out that my resolve to be authentic and true to myself proved bigger and stronger than that which threatened to topple all the confidence and courage I had mustered so far in my transition journey. This, I believe, is the essence of why others point out to us that we’re courageous, brave, strong, whatever, for pursuing our transition.  It’s not to say that we’re not scared and vulnerable. Rather, it speaks to the fact that we’ve developed a sense of purpose and drive that allows us to face and conquer each of those fears, doubts and insecurities.

As we think about our identities and transitions, many of us (myself included) have regrets that we did not come to terms with it sooner. What I’ve come to understand is that each of us had to reach a point where we were ready to deal with our identity and the need to transition.  We each need to develop that sense of purpose, that drive, that resolve to no longer accept living in hiding.  We need those pieces in place if we’re going to be successful.  Had I not lived 39 years of shame, secrecy and denial before transitioning, I would not have the same motivation to see this journey through and likely would have failed in transition.

With this new understanding, I now see why others see us as strong and courageous, brave and powerful. We truly are! There is no doubt that there are many in this world who live with other secrets, shame and self-loathing who are unable to summon the needed determination to overcome and shine through.  So celebrate who you are today, know that your journey will continue to challenge you but that through each challenge you will find new levels of strength that you never knew you were capable of.  With that knowledge, be confident in who you are, let the world know you will not shrink before their hatred, and find the peace that comes from living authentically in your own true gender space.

One Reply to “Of Strength, Confidence and Courage…..”